This is a chronicle of my efforts to build a "Green" home - one that uses less energy, has better indoor air quality, uses less water, and hopefully someday produces energy. We have used trees taken right from the site, metal roofing from a manufacturer down the street, and a local manufacturer/installer of cellulose insulation, in an effort to keep the materials local, recylced, and Green. So far we are quite pleased, and it is still a work in progress. 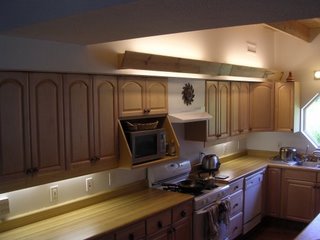 To Save the Planet, Get Rid of Compact Fluorescent light bulbs!

What? Everybody says CFL's are the greenest thing since Al Gore ran over Kermit with his Prius. But Compact fluorescents are NOT the greenest bulb out there, they just beat incandescent A-Lamps by a long way. Those long, 1" diameter T-8's with an electronic ballast are *twice* as efficient as a compact fluorescent. You can also get a smaller, 5/8" diameter T-5, which is also very efficient and fits nicely under a cabinet. Here is a picture of both in action, in a wall-mounted indirect configuration. Light the walls, then the room looks bright. Both of these light fixtures are very, very simple: just a strip of wood hiding a very basic, but high quality, strip light. These are NOT shop lights from the discount aisle at the hardware store, they have an electronic ballast and can match almost anything out there in efficien 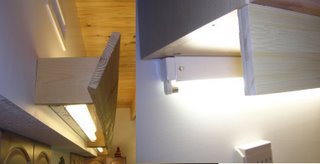 cy. For about $18 a pop. Here is a link to the kind that I ordered. The undercabinet lights were also quite inexpensive, but good quality. Here is a detail of both kinds of light fixtures: 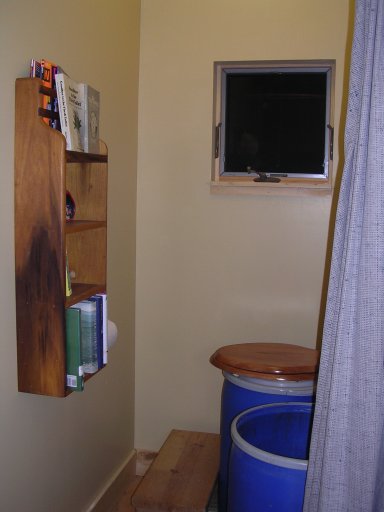 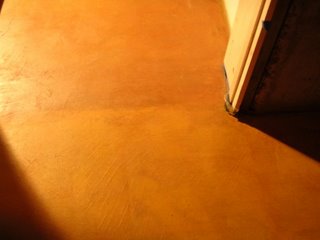 
We have completed the concrete stain, using Iron Sulphate. We did have some problems with the sealer we chose. Read all the details on my concrete stain page.

Here's proof: It's 16°F outside, and by 2 in the afternoon it is 66.5°F inside. This is with no heat whatsoever (OK, I was running a radio) for several days, except the sun shining in the windows. My contractor, Robyn Magner, had told me it would be 50 degrees inside without any heat - he was wrong! It's a lot warmer than that. 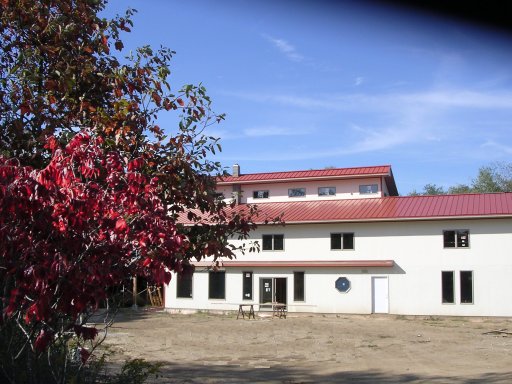 Finally the siding is complete, the roof and windows are complete. The rest of the work occurs inside, except for some yard work. 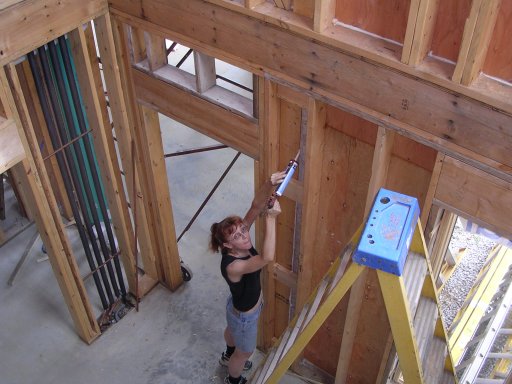 We went crazy with caulking. Before the insulation went in, we caulked all the cracks from the inside - framing around windows, horizontal cracks in exterior sheathing. We stoppered penetrations in the top plates for electrical wires with expanding foam. We caulked the exterior sheathing at all top and bottom plates. We shot insulation into crevices that the cellulose insulators would not be able to get to. Infiltration is one of the largest heat leaks in a house. With the Tyvek house wrap on the outside, the extra layer of foam, and the attention to detail on caulking and weatherstripping, this house should be as tight as a drum. Here is Qhyrrae, hitting a horizaontal joint on an exterior wall. 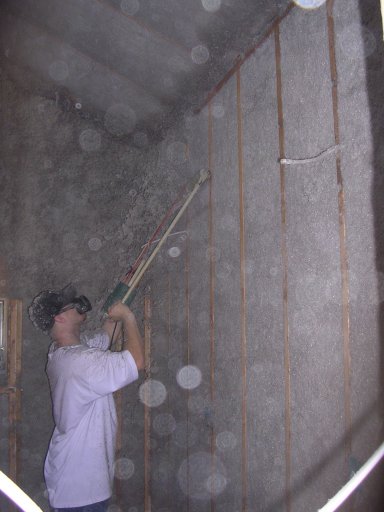 Snow, anyone? We are insulating with blown cellulose, R21 in the walls, (plus exterior foam to reach R26) and R60 in the cielings. They blow it at the walls, with an adhesive and a slight amount of water. The insulation sticks to the walls, then they take a handheld machine powered by an electric drill and grind off the excess. They suck up all the waste off the floor, and blow it into another wall.

The ceilings are blown on top of a screen, which is then covered by sheetrock later. 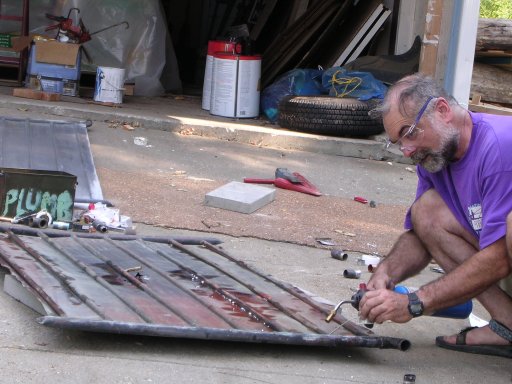 I have three used solar water heater panels, obtained from my Father-in-law who used to sell them. These three orphans were in bad shape. One of them had been allowed to freeze and burst, another had a big gash in the copper absorber plate, and the insulation had deteriorated in them. A wonderful Sunday afternoon project! Soldering up the bad spots, I've painted the collector absorber plates with black barbeque paint from the hardware store, and I'll add some fiberglass in 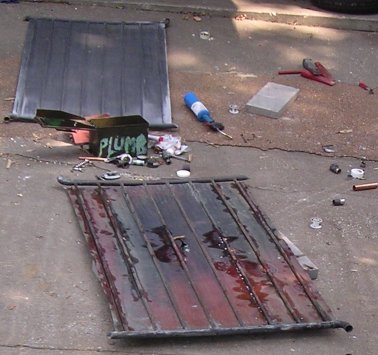 sulation to the backside to make them more efficient, glue on the tempered glass cover plates with silicone rubber caulk, and voila!: free hot water. They'll attach directly to the metal roof with S-5 Standing Seam roof connectors. The house is already roughed-in with two 3/4" PEX pipes to the roof, which will be insulated (PEX doesn't hold up in sunlight if it isn't covered). The system will be pumped by an ingenious little DC pump called the EL-SID. EL-SID PUMP This pump uses a 10 watt solar electric panel for it's control system. If there is enough sun to make juice to run the pump, then there is enough sun to make solar water heat. No thermostats, differential controllers, or fancy electronics. If there is half enough sun, then the pump runs at half speed, slower water has more time to pick up solar heat. There is only one moving part, the impeller. There are no brushes, commutators, bearings, shaft seals, and other stuff to fail. This is the most ingenious pump I've ever seen.

Everything goes up on the roof in a month or two, when the main construction is winding down.

So what's so Green about this house?

Comments below describe some of the "Green" features

Here are a few shots as the third floor begins to take shape. There are two small lofts on the third floor, big enough for a nephew to sleep in or for use as a meditation or reading room.